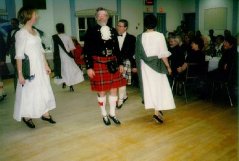 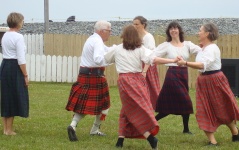 Dancing in a strong wind at Scotia Plaza in downtown St. John’s, June 1988 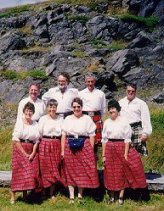 (Click any photo above to view pictures highlighting some of the demonstrations of Scottish Country dancing we have given over the years.)

Our experienced dancers form a Demonstration Group whenever we receive a request for and agree to a performance of Scottish Country Dancing.  Demonstrations have ranged from informal performances at nursing homes to formal performances on stage at the Arts & Culture centre.  Each year we dance at the Newfoundland Burns’ Supper – often with a special programme chosen with a Burns’ theme in mind.  Our instructors also lead an hour of ceilidh (general) dancing at the end of the Burns Supper.

Some of the venues or events that our dancers have danced at over the years are:

Our repertoire for demonstrations varies but typically includes both traditional and modern dances. In some cases, locally devised dances with a Newfoundland theme for which Newfoundland tunes are used may be included.

When planning a demonstration we are sometimes able to call upon Corryvreckan to play for us.

We will consider requests from schools, churches, seniors residences, charitable fund raisers etc. for demonstrations as part of our commitment to community service.